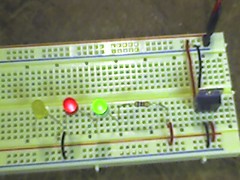 
Step 2. It was almost impossible to see three lights in this circuit, so I went back to two for this photo.


Let There Be Light 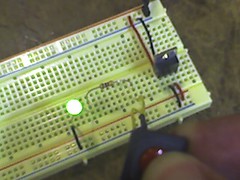 
Step 1. The circuit in action with momentary switch.

It’s always informative to read the news two years later. Andrew Boyd’s depiction of a brave new wired world empowering grassroots activism must have read as a hopeful herald of more democratic times. Today, alas, is reads more like a casualty list for the political left. The Iraq war (which he depicts prematurely as “over”) hardly seemed to notice the two massive marches that he describes. Howard Dean’s campaign foundered as soon as Iowans began to vote. Even the huge protest turnout at the 2004 Republican National Convention resulted in yet another term for George W. Bush, along with a Republican majority in both houses of Congress. So if online electronic organizing is so effective, where’s the beef?
END_OF_DOCUMENT_TOKEN_TO_BE_REPLACED

by Rob FaludiPosted on September 11, 2005 Posted in General

Ventured up to 59th and 6th at 9:30 this morning to experience Janet Cardiff’s “Her Long Black Hair” with my wife and her friend. There was a huge crowd even though the audio kiosk had not yet arrived. Apparently the principle of scarcity was in action here. It was the last weekend to check out a headset for free and follow Cariff’s journey through south-east Central Park. The experience took about 30 minutes and lead from CPS up to the Bethesda Fountain. Along the way, we heard audio from a CD player and were occasionally instructed to look at one of five location photographs.
END_OF_DOCUMENT_TOKEN_TO_BE_REPLACED