by Rob FaludiPosted on December 27, 2011 Posted in General

The students in our NYU ITP Sensitive Buildings class presented terrific final projects last Tuesday. They spent their Fall making the most of a unique opportunity to invent prototypes for large-scale sensor/device networks, then tested out their creations in a landmark 28-story apartment building on New York’s Columbus Circle. The property owners had invited ITP to develop a variety of prototypes to enhance the livability, ecology and community of their building. Here’s what the students delivered in their first round:

The class was supported by New York University’s ITP program, the generosity of 240 Central Park South who provided the venue along with copious amounts of their time, and sponsorship from Digi International who supplied XBee, ConnectPort and iDigi networking solutions along with invaluable system architecture and support services.

Here’s a video from the elevator group, who has been asked to make their installation permanent:

by Rob FaludiPosted on December 18, 2011 Posted in General

by Rob FaludiPosted on December 14, 2011 Posted in General

The New York Observer is doing a video series about local people with interesting ideas. 12 to Watch in 2012, profiles some New Yorkers doing innovative things with technology and design. I got to be in Episode 7, which came out today. In it, I talk about designing, artists, science, the Internet of Things, Digi International, data, and how the intersection of all these elements can enhance the human experience. Thanks to Brian Spinks, who organized it and Megan McCarthy the Observer’s News Editor for being so kind as to include me.

You can watch the Episode 7 video here.

by Rob FaludiPosted on December 7, 2011 Posted in General

That’s pretty awesome and something I’m proud to be even a small part of.

The International Center for Theoretical Physics in Trieste, Italy, which I’ll be visiting for a conference in February, organized the class in collaboration with the Association of African Universities, the University of Cape Town and the University of Ghana, Legon. The class also used XBee radios in open source sensor systems from Digi’s partner Libelium.

Here’s a poster with more info about the workshop:

…and the rest of the classroom:

by Rob FaludiPosted on December 5, 2011 Posted in General

On the evening of December 1st, I got to teach an XBee Wireless Networking workshop for the staff at my favorite interactive science museum, the Exploratorium in San Francisco. We went over the basics of wireless networking, made a chat session, then built out interactive doorbell projects. Finally, the staff got a homework assignment for creating more advanced sensor networks. My former student and fellow ITP alumni Chris Cerrito put together the event, with generous support from Bill Meyer, Exploratorium’s Director of New Media. (Equipment and teaching time for the workshop was donated by Digi.)

Staff participation came from all walks of Exploratorium life. We had ambassadors from their online group, Institute for Inquiry, Exhibit Services, Outdoor Galleries, Visitor Research as well as folks from the new Science of Sharing grant and others. Next step, maybe early next year, is to teach a follow-up class on connecting stuff to the Internet, including using iDigi with other gateway and cloud services. I’m hoping this will help the museum create new outdoor science data networks on the Embarcadero as well as explore online real-time data with published APIs for sensors and exhibits.

It’s been terrific working with everyone at Exploratorium so I’m looking forward to continuing the collaboration. Here’s a few more photos from Thursday, including the workshop room, the hall with visitors and the Cubatron set up for their amazing After Dark event:

by Rob FaludiPosted on November 28, 2011 Posted in General

“Building Wireless Sensor Networks” has just been translated into Japanese, thanks to the tireless and inspired efforts of my friend and colleague Shigeru Kobayashi for the Make Projects series. Translation was done by Bun Mizuhara with design by Yosuke Nakanishi. The Japanese title roughly translates to read, “Wireless Sensor Networks Made with XBee,” which describes the content very nicely. Shigeru chose the new cover art as an homage to the Botanicalls project, which used XBees in its classic deployment and will likely again in a future releases. I can’t wait to get my hands on a copy of this new translation, and then beg a friend to read it to me.

The Japanese version’s release date will be December 9th, 2011. You can order advance copies on O’Reilly Japan right now!

by Rob FaludiPosted on November 22, 2011 Posted in General 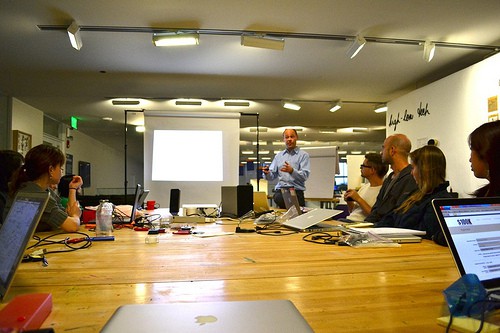 Last Thursday was spent visiting, lecturing and workshopping at the MIT Media Lab in Cambridge. The Media Lab is similar in scope and mission to NYU’s ITP, where I teach. It operates at the intersection of design, media and technology. My host, Leah Buechley, is an Assistant Professor there. Leah was also our collaborator on the LilyPad XBee wearable radio system. Her lab is called the High-Low Tech Group. The High-Low Tech is focused on engaging a diverse audience in designing and building technologies for themselves, something I feel pretty great about.

While there I had the pleasure of meeting Jennifer Jacobs, who is working on the expression of identity through technology, Emily Lovell, whose doctoral work examines craft and technology for educational resource design, Jie Qi who is ingeniously blending electronics and computation with paper craft, Sam Jacoby a student interested in the relationships between traditional hand-work and computation, and David Mellis who is working create tools and examples that help people to design, build, and program  personally crafted electronic devices, when he’s not writing the Arduino software as a member of the core team.

I shared my Fun with XBees talk about the cool things people are doing with XBee radios and the iDigi cloud platform, immediately followed by a full workshop in basic wireless sensor networking that was open to the entire Media Lab. With the basics under their belt, my next class there will probably focus on Internet-connected devices hooked up to cloud computing. Here’s a few snapshots from the first workshop: 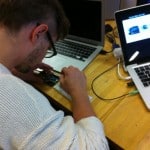 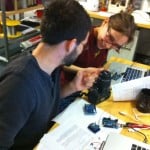 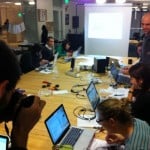 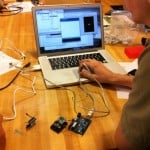 Networked Society: On the Brink

by Rob FaludiPosted on November 7, 2011 Posted in General

There’s a great new short film from Ericsson that I took part in, examining the future of the Internet of Things, called “Networked Society: On the Brink.”  The full film is embedded below, or if you just want a quick peek, see the trailer. In the first few days, the piece has had over 53,000 views on YouTube, but that’s not surprising, given the luminaries I had the honor of joining! Look for commentary by:

TechCrunch and GigaOM picked it up. The film was beautifully produced by Radon Creative:

by Rob FaludiPosted on October 31, 2011 Posted in General 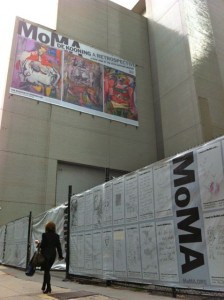 In the photo below you can see them beginning their journey into deep storage, where they will stay before being examined by a conservator for preservation recommendations.

After that, it’s on to their permanent home in the MoMA Collection warehouse in Long Island City where they will go into the Design rotation, to show up periodically back in the Museum on the 3rd Floor. The work is always listed online. Other interesting things I learned were that all MoMA artists get an ID card that allows them free entry into the museum for life. Also any digital documentation we submit will be stored forever in a triple-backed-up server that checks itself four times a day, located someplace under a mountain. Serious.

The physical hardware was generously donated to MoMA by SparkFun Electronics.

by Rob FaludiPosted on October 27, 2011 Posted in General 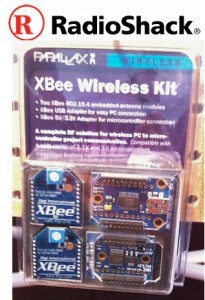 This month Radio Shack is testing the waters for a return to its roots and the DIY revolution. Parallax is supplying 500 stores across the country with XBees and other maker-oriented components. Arduinos are being supplied directly by the manufacturer*. If sales take off, the distribution will extend to Radio Shack’s 5,700 company locations and potentially to 4,500 other independent dealers.

This is an amazing opportunity to bring the innovative power of rapid prototyping directly to a broad audience of students, inventors, educators, weekend tinkerers and professional engineers. Here’s a complete listing of the Radio Shacks with XBees, Arduinos, etc. If you’re near one, then a visit along with a purchase could help put the wheels in motion for countless creative components to be available nationwide. Check the list and go!